The Herman P. Dean Firearms Collection is the result of a lifetime of enthusiastic and informed collecting. Mr. Dean, an avid sportsman and historian, who was one of the Museum’s founders, was known internationally for his historic firearms collection and his expertise on the subject. The Collection was donated in the early years of the institution, and traces the use of firearms from the earliest hand cannon through the machine-made weapons of the l9th century. 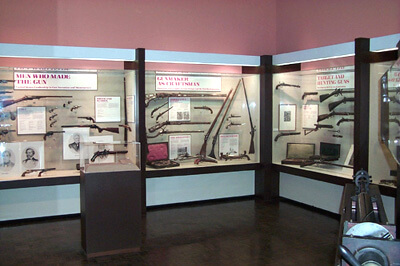 The exhibition is designed in such a way that it physically leads the visitor through a chronological survey of historical firearms, with an emphasis on firearms and accoutrements of the American frontier. Each case has an overriding theme: Tracing the Craft and History of Early Firearms; Firearms Invention: Early Developments in Igniting the Powder, Improvements in the Lock, Mechanism, Refinements and Diversity; The Pioneer: The Kentucky Rifle - Symbol of the American Frontier; Powder Horns: Imaginative Containers for Gunpowder; The Golden Age: Kentucky Rifles and Pistols – Triumphs of Craftsmanship; Westward Expansion: Traders and Trappers and the Buffalo Rifle; Decline of an Era: Kentucky Rifles and Pistols – Converted from Flintlock to Percussion; English Arms in America: A Basis for Later Gun Design; Martial Arms: Firearms Used in American Wars; Men Who Made the Gun: U.S. Leadership in Gun Invention and Manufacture; Gunmaker as Craftsman: Firearms as Examples of Fine Design and Skilled Workmanship; Target and Hunting Guns: Developing Skill in Marksmanship; and Tools of the Trade: Gun Making Tools and a 19th Century Rifling Bench.