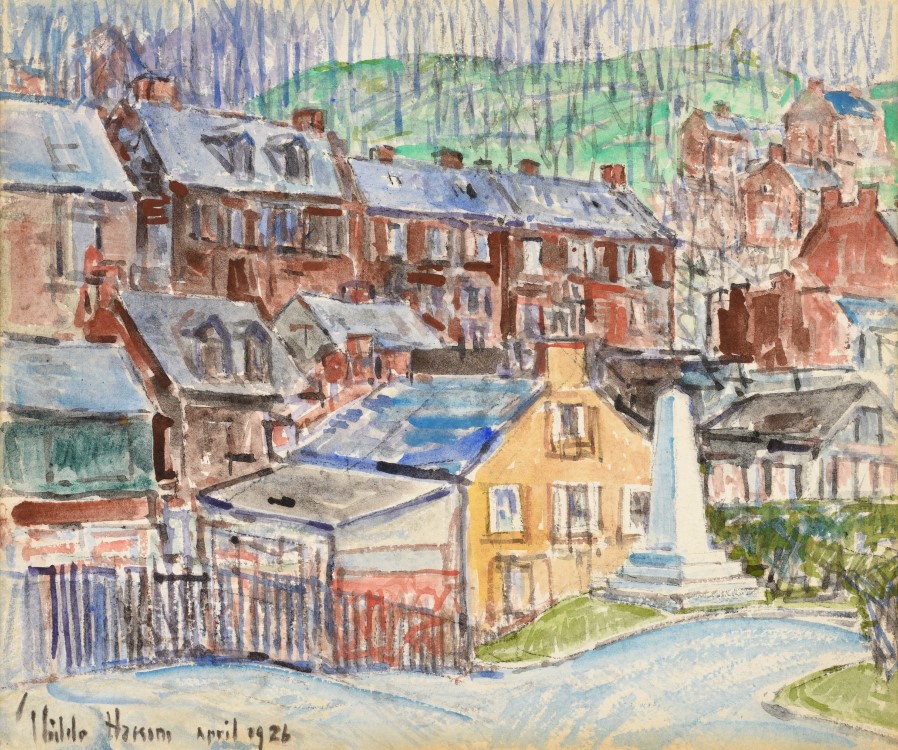 “Hassam completed at least four known works, one of which we purchased from the American Academy of Arts & Letters in March of this year. The Fogg Art Museum at Harvard has another. We do not know the whereabouts of the others,” Fleming said.

The newly acquired watercolor will join five oil paintings, the 1926 watercolor titled Harpers Ferry, and five prints, all by Hassam, in the Huntington Museum of Art’s permanent collection, including Lincoln’s Birthday Flags – 1918, which is one of the highlights of HMA’s Daywood Collection.

“Our already strong collection of works by Hassam has increased greatly with this new purchase, and it only seems appropriate that this watercolor created in West Virginia should have a permanent home here at the Huntington Museum of Art,” Fleming said.

The newly acquired watercolor titled Harpers Ferry, No. 2, which was exhibited in New York and Washington, D.C., with other Hassam works in 1927, highlights the history of the West Virginia town.

“With Harpers Ferry, No. 2 the artist focuses our attention on the stone obelisk which commemorates the original location of ‘John Brown’s Fort,’ the engine house where abolitionist John Brown made his last stand during the historic raid on the Federal Armory at Harpers Ferry in 1859,” said John Farley, HMA Senior Curator / Exhibition Designer.

“Although Brown and his small band of supporters did not succeed in their attempt to spark a nationwide armed uprising of enslaved people, his belief that the American institution of slavery could only be destroyed by violence would be confirmed two years later with the eruption of the Civil War in 1861,” Farley continued.

The recent acquisition differs from other depictions of the town of Harpers Ferry in HMA’s permanent collection.

“Hassam’s emphasis on this aspect of the history of Harpers Ferry results in a composition very different than the picturesque confluence of the Shenandoah and Potomac rivers so typically represented in views of Harpers Ferry,” Farley explained. “This newly acquired watercolor stands on its own as a significant work with deep connections to our state’s tumultuous origins, created by an acclaimed American artist. It also makes a terrific complement to any of the more scenic views of Harpers Ferry we have.” 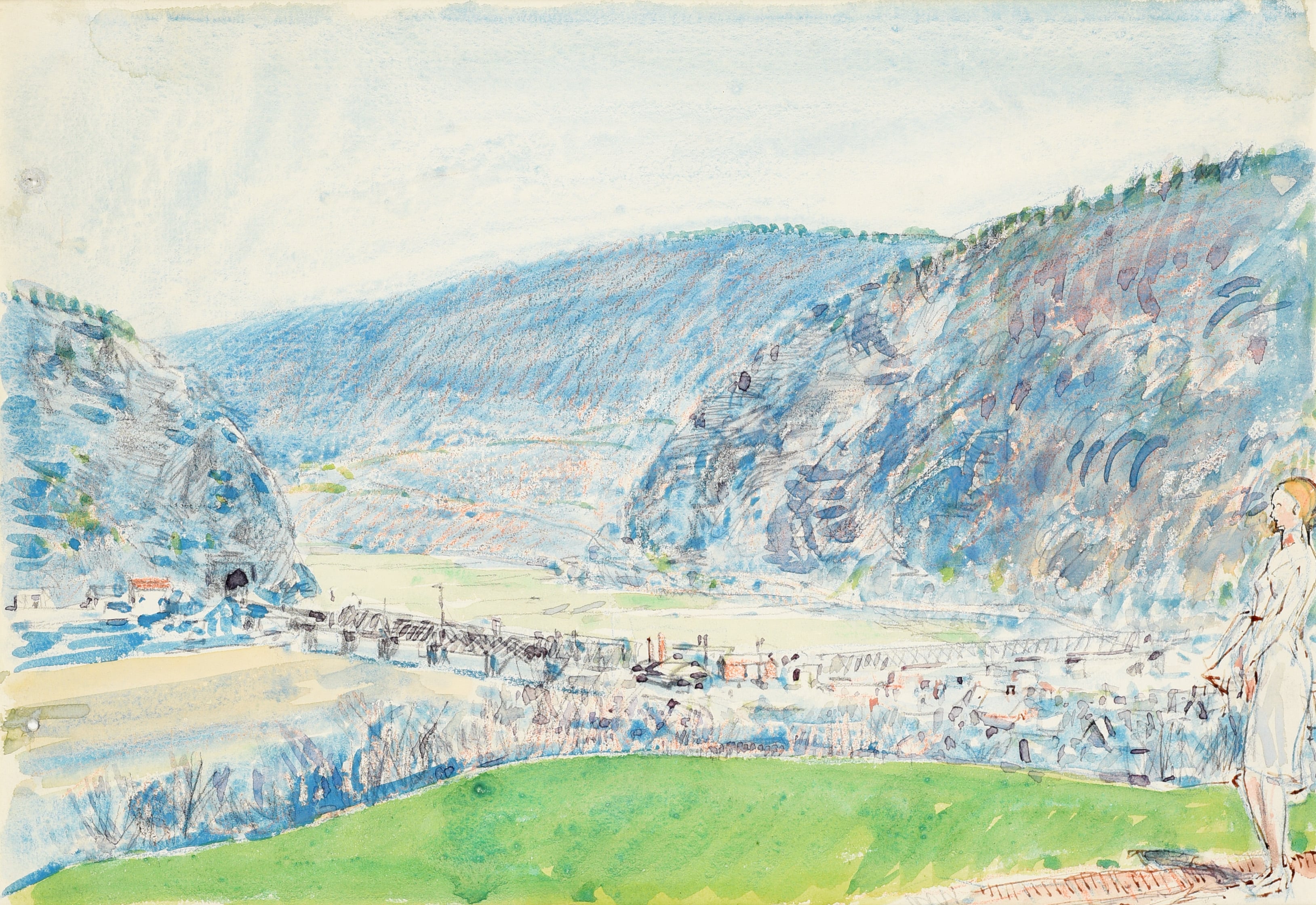 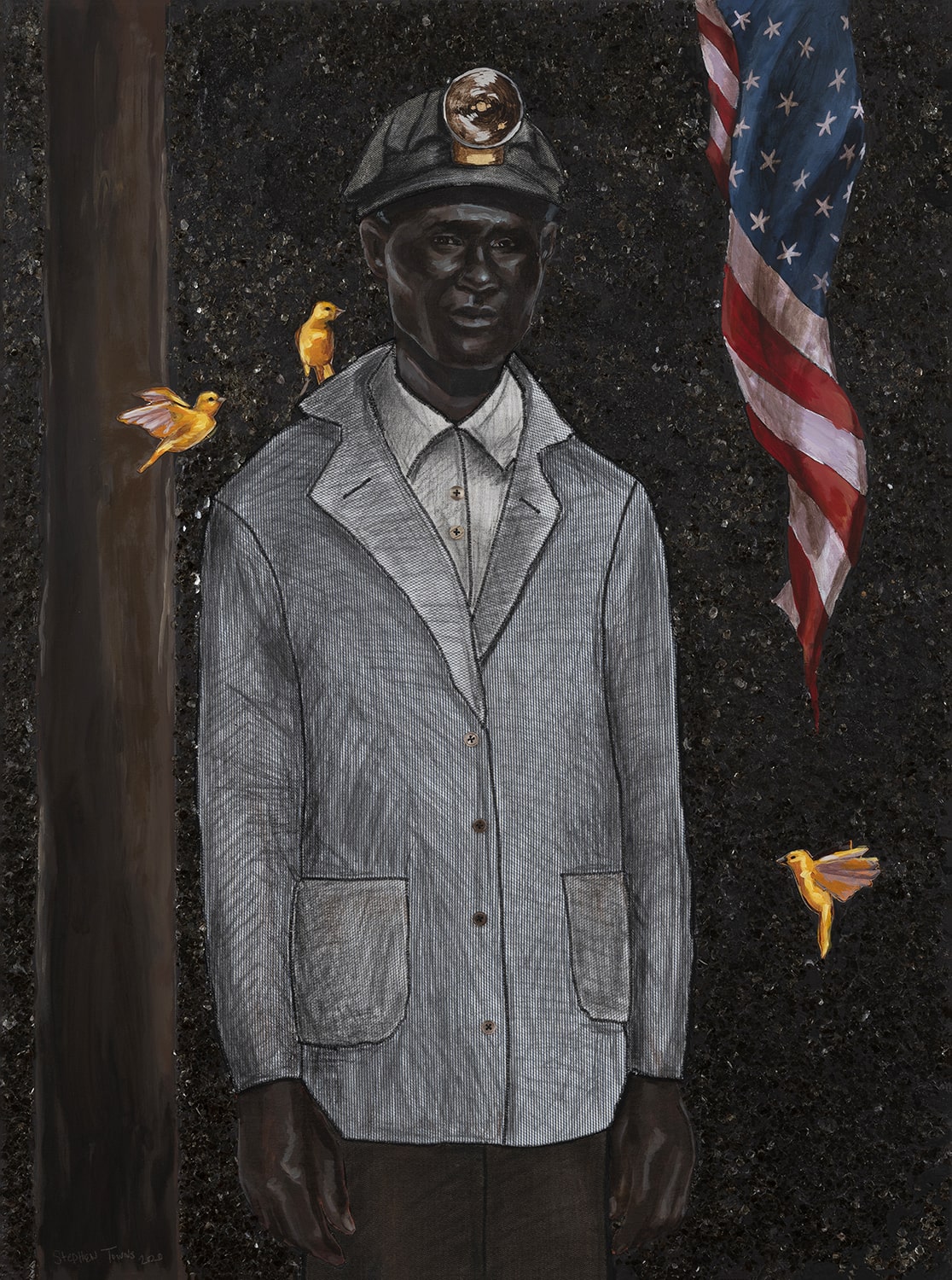 SEPARATED BY A CENTURY – HUNTINGTON MUSEUM OF ART

The Huntington Museum of Art is excited to announce the acquisition of two important paintings for its collection. The two paintings traverse a century of American paintings and reveal important stories about the Mountain State and its history.

Hassam made only one trip to West Virginia, arriving in April of 1926 when he spent a day sketching and painting in Harpers Ferry. This work, showing the view from the famous Hill Top House Hotel, includes one of the onlookers (a female figure shown at right) who would have watched Hassam paint that April day at Harpers Ferry. In the middle background is the B&O Railroad Bridge, built in 1889, and at right is the Shenandoah River Bridge, also built in 1889 and destroyed in 1936.

“It is believed Childe Hassam completed just four sketches of Harpers Ferry that day, three watercolors and one pencil drawing, making this one of only a tiny number of works by Hassam ever completed in our state,” stated Geoffrey K. Fleming, Executive Director of the Huntington Museum of Art. “It makes this painting an incredible acquisition for HMA.”

Not long after their creation, the Harpers Ferry sketches were exhibited at the National Academy in New York City in their 1926/1927 Winter Exhibition, in a solo exhibition at the Arthur Harlow & Co. Gallery in New York City the winter of 1927, and in a solo exhibition at the Gordon Dunthorne Gallery in Washington, D.C., in the spring of 1927. The Fogg Art Museum at Harvard University owns another of the Harpers Ferry works.

This watercolor will join five Hassam oil paintings and five prints in the Huntington Museum of Art’s permanent collection, including Lincoln’s Birthday Flags – 1918, which is one of the highlights of HMA’s Daywood Collection.

The second recent Huntington Museum of Art acquisition is a mixed media portrait of an African American coal miner by noted African American contemporary artist Stephen Towns (b. 1980) titled After the Shift. In this work, the Baltimore-based artist references historical photographs of Black West Virginian coal miners that the artist discovered in the West Virginia State Archives. Each of the six works in his Coal Miners series, including After the Shift, celebrates the contributions made by African American workers in shaping and building this country. The Smithsonian National Museum of African American Culture and History in Washington, D.C., is among the recent museums to acquire a work by Towns.

Between 1880 and 1940, thousands of African Americans, native-born white Americans, and immigrants migrated to West Virginia and worked alongside one another in the southern coalfields. The legacy of this workforce lives on in the region’s culture and demographics. Of the 10 counties in West Virginia with the highest percentage of Black residents, six are in the coalfields. “The Coal Miners series depicts us as West Virginians – and working class Black West Virginians in particular, who are underrepresented in our public collections,” said HMA Senior Curator/Exhibition Designer John Farley. “I’m delighted that we have our board’s approval to purchase this painting. I have no doubt it will become an icon in our permanent collection.”

After the Shift complicates the simplistic narratives about our region’s history and its people that often go unexamined. “It helps add nuance and texture to collective images and ideas we may have thought were clearly defined,” Farley said. “It subverts stereotypes. It sharpens our understanding of who we were and who we are, which inevitably influences who we believe we can be.”

“These two works – created a century apart – span artistic styles, periods and moments in history and more importantly reveal both relatively unknown and hidden stories about our state and region,” Fleming added. “These two important American painters enhance an understanding of our history through artistic creation. What can be better than that?” The Huntington Museum of Art is excited to announce the acquisition of two important paintings for its collection. Both works are masterpieces that relate to the history of art in the Mountain State and are among the rarest of their kind created by their respective artists.

“This is a wonderful addition to the collection of the Huntington Museum of Art and to West Virginia,” noted West Virginia Department of Arts, Culture and History Curator Randall Reid-Smith. “Visitors to HMOA will now be able to appreciate these two amazing paintings that have contributed to the history of art in the Mountain State.”

The first work, “Harpers Ferry, Virginia,” was created by the important landscape painter and lithographer, Thomas Doughty (1793-1856). Born in Philadelphia, Pennsylvania, Doughty was the first American artist who shied away from portraiture and worked exclusively as a creator of landscapes. In 1827, he was elected to honorary membership in the National Academy in New York City, one of the first important art organizations founded in the United States.

The painting depicts the intersection of the Potomac and Shenandoah rivers and is infused with the atmospheric qualities that are a hallmark of Doughty’s paintings. Dated 1825, the painting was likely begun in 1824 when the famous ferry that gave Harpers Ferry its name was discontinued and was replaced with a covered wooden bridge. The bridge itself was completed in 1825 and two of its newly constructed masonry piers can be seen in the background. Harpers Ferry was an important junction point during colonial times, located both at the confluence of two major rivers and the site of the first reliable and regular ferry service that crossed the Potomac in that region.

“This work was an amazing acquisition for our museum as it has now become one of the earliest dated landscapes depicting West Virginia to be housed in the collection of any museum in the state,” commented Geoffrey K. Fleming, Executive Director of the Huntington Museum of Art. “It has been a privilege to bring this work back home where it belongs.”

The second work acquired by the museum is “Tranquility” completed between 1939 and 1941 by the most famous naive/surrealist artist to ever come out of West Virginia, Patrick J. Sullivan (1894-1967). Sullivan, who was also born in Pennsylvania, moved with his widowed mother to Wheeling, West Virginia, around 1910. He worked only briefly as a painter, completing just 15 easel paintings during his short career. Discovered by the important art collector and gallerist, Sidney Janis, Sullivan’s works were featured at Janis’s gallery and during the late 1930s and 1940s were included for exhibition at the prestigious Museum of Modern Art (MOMA) in New York City. “Tranquility” itself was exhibited at MOMA in 1943. Though he achieved a brief period of fame during that period, Sullivan became embittered that he could not seem to make a living as an artist, so he abandoned painting. Thus, there are few existing works by this uniquely talented artist.

While Sullivan was somewhat better known for works that utilized a mix of landscape and elaborate symbolism, “Tranquility,” which is considered the last of his masterworks, is a pure landscape, containing the only known anamorphic device in any of his paintings. Sullivan himself wrote about his reason for creating “Tranquility” in 1941, remarking:

“In these days of nerve-wracking events, it would be well for the artist to wield his brush in the furtherance of a letdown in emotional disturbances which are inimical to the welfare of a mighty nation such as ours... Artists should assist, therefore, in portraying work that will help keep the nation calm and cool in all its deliberations so that it may have the full use of its prowess to erase from the earth the foul, nauseating thing called Nazism . . . It is my sincere wish that those who look upon "Tranquility" will be emotioned the way the artist intended: that it will give them a feeling of tranquility which is sorely needed in today's emotionally upset world.” Sullivan wrote further, "After you have looked at Tranquility awhile turn it to your right and look at it sideways. You will notice the mountains form a sleeping figure resting in a calm, peaceful manner. All is quiet and undisturbed. The trees, water, everything in the picture is in a tranquil state, yet the picture is full of life - it sings. The face of the sleeping figure may be seen between the branches of the tree on the left."

With the majority of Sullivan’s works already in important museum collections, including two at the Museum of Modern Art in New York, one at the Smithsonian American Art Museum in Washington, D.C., and two at the Oglebay Institute in his adopted hometown of Wheeling as well as several whose locations are today unknown, it was thought to be unlikely that the Huntington Museum of Art would ever be able to acquire one of his works for its collection.

“It had been four decades since one of his paintings appeared for sale, so it became a do-or-die moment for us,” noted Fleming. “We needed to act as quickly as humanly possible to secure this work as it might have been another four decades before another became available. Being able to acquire one of his masterpieces, and one that had been exhibited at the Museum of Modern Art during his lifetime, was a miraculous opportunity.”

The two paintings will be shown later this year at the museum when the stay-at-home order in West Virginia is lifted. For more information on events and programs at the Huntington Museum of Art, visit hmoa.org or call (304) 529-2701. HMA is fully accessible.